COVID-19 UPDATE We are monitoring government guidance closely and continue with our diligent cleaning and booking regime. Guests can feel secure that we have taken all recommended necessary steps to preserve a safe covid free environment. We have rebooked those who had to cancel due to lockdown and given full refunds to anyone who was unable to rebook. No vouchers, no roll overs. We hope all or regular visitors are safe and well and looking forward to welcoming new guests to the coast or the hills. Have fun. Linda Brian and the Team

Centre of Britian - Once Brewed

Featured on Episode 2 of Tales from Northumberland on ITV in 2013 when Robson Green stayed at the Haughton Green Bothy. EHB is just 3 miles from The Sill The National Landscape Discovery Centre.

Hott, an Old English word for ‘stand of trees’.

Originally a game keepers cottage forming part of the Blackwater Estate, EHB was portioned off and sold along with several other properties and land in the 1960s. It is now a small farm situated at the head of a remote valley with it's own off grid micro generating capacity.

The stone house sits on a limestone bluff in the middle of  35 acres; home to local hill sheep, deer, foxes, Galloway cattle, badgers and a variety of bird life including hen harriers, osprey,  larks, swans and cuckoos and of course the  Red Squirrel.

This year sees the planting of 220 willow slips of 8 different varieties for willow basket weaving.

Daring guests can enjoy  a wild swimming in the local glacial lough (not temperature) seen from the garden, which is warm in the summer and only 6' deep.

The south facing farmhouse is protected by a small stand of native trees to the north and has a sleepered terrace and gravel garden to the south overlooking a pond and stream.

The cabin with extensive views to the West has easy armchairs and large writing desk.

Half a mile from the Pennine Way in the World Heritiage Site of Hadrian’s Wall, several small sculptural pieces have been already been introduced with more under commission, creating conversation pieces and encouraging reflection and introspection. The permanent pasture is being slowly reclaimed, and replanted with native trees, in homage to 'Little Sparta' near Peebles in Scotland.

A carved stone column, Si Monumentum Requiris, marks the turning point to the house with a Poetry Seat just above the house stream. A slate clapper bridge crosses the stream to the fields beyond. There are several ‘wave oak’ farm gates mirroring the outline of the surrounding crags and hills.

The farm is fully off-grid, with spring/well water, sunk at the base of the fell, a 5kw wind turbine electric, 2 wood fired stoves, bottled gas for cooking and a post box 3 miles away. BT have however introduced civilisation with a phone line but mobile reception is patchy. TV via satellite for those who need to keep in touch.

It's own stream, the Caw Burn runs through from the Forestry (Clear felled)  to Greenlee Lough, half of the land is under a SSSI designation; famous for its luminous pondweed.

At the edge of the Northumberland National Park, and part of the national 'Dark Skies' park, this 'retreat’ lies 3 miles from it's nearest neighbour. Truely isolated with no other lights to be seen at night, access is along a single hard track which passes through several farm properties along a ridge, culminating in a descent below Sewingshields Crag and the King and Queen Crags to the stone farmhouse at the heart of its own 35 acres. King Aurthur is thought to sleep under the crags and Ring and Cup marks have been found on top of the crags where hanggilders search for updrafts. Low clearance cars would not relish the track.

A stone barn and 2 Yorkshire board barns can house horses, dogs or mountain bikes for those who may wish to bring pets or equipment with them. There is an electronic telescope on site.

Little can be more spine tingling than seeing cattle atop the crag calling along the valley or a lone huntsman silhouetted stationery against the skyline. Sheep cling to heathered hill-sides, purple in August and September or rose bathed at dawn throughout the year. Star encrusted skies are breathtaking.

A ghost path is planned with limestone chippings and Jackmontii birch underplanted with cyclamen to illuminate by Moonlight.

The Pinnacle rock sought by climbers is visible from the kitchen.

EHB has three bedrooms all ensuite and a sofa bed and wooden glazed cabin and deck.

A perfect place to write, paint, compose or contemplate.

Grate inside! Great outside! So says the carved stone over the sitting room door! 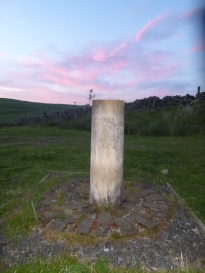 All of our properties are close to fabulous beaches or woodland walks, so pack up a picnic and enjoy the wonderful British summer countryside. Bath in nature...............

For all rental enquiries please contact May Rhodes on

07801651783 at pinkceb@aol.com. Dunstarn Cottage is also available through Air B and B as is Croft Cottage and 85 Queen Street.

Over the past couple of years we have hosted a walking theatre performance and two summer outdoor theatre events, as well as assisted Cinematography students to make a film for Leeds University and enabled Vet students to obtain valuable work experience during lockdown......if you have a project in mind, we'd be pleased to discuss things.........

We are currently hosting weekend gun dog training courses for beginners and advanced  through Kirkbourne Spaniels.........